The city of Bri sits atop the registry as the pinnacle and birthplace of civilization. Its construction began soon after The Cataclysm, and the city has had all the time since to build upon itself in every direction. The city owes its existence to queen Rose Velka; who was, before her assassination, one of the few people known to survive The Cataclysm and ruled the city from its founding to her death. The city is located in the centre of The Haeven, slightly inland from the coast. It’s built on a plateau at the feet of Mount Fenri; and has spread along the cliffs and chasms over time. Bri is one of the few major cities with no ocean port, and instead relies on its extensive skyport for the transfer of goods. For larger shipments, a consistent chain of merchants transport goods from Spada’s ports which is one of the few roads to be used daily. 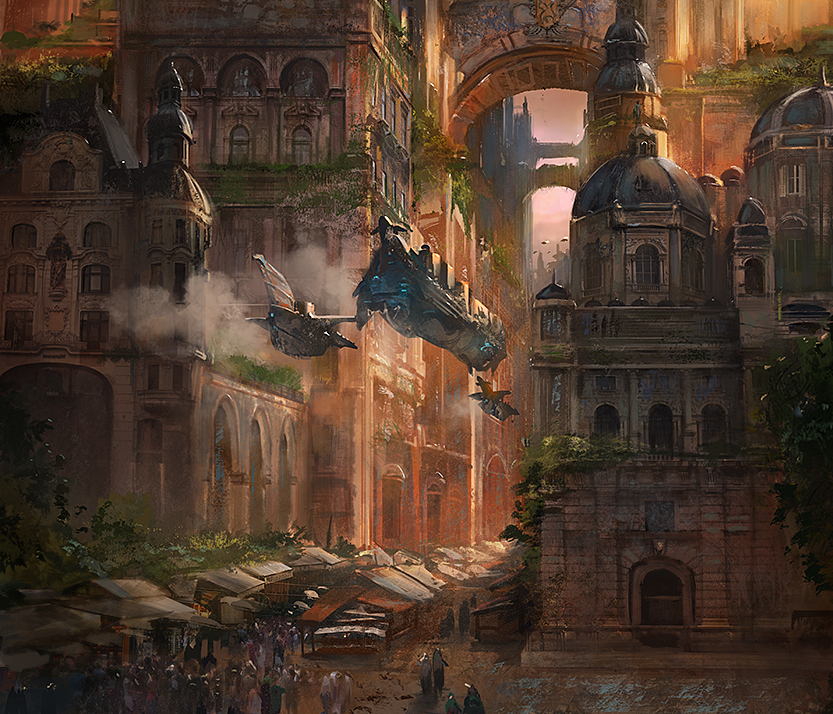 The city of Bri had its original construction started in the year 3 PC, but wouldn’t grow into the capital it is today until around 83 PC. Within its first century, Bri facilitated the construction of her three sister cities: Spada, Barga. and Aexenveil. During this period of around forty years, Bri’s own expansion was put on hold behind what is now called the ‘Inner Wall’ to push its resources into those projects. Rose Velka‘s efforts to establish this early control of the region allowed the city to become a hub not only to the region, but also to the other pockets of civilization that began to sprout up. Many of Bri’s trade routes stem from these years, which has given the people plenty of time to wear in and properly develop their connection to one another.
In the year 112 PC, after the Erov Skirmishes, Rose Velka decided the protect the region under a blanket of military force. This led to the creation of the first standing military, originally centered in Bri but later moved to Aexenveil.
In the year 140 PC, the Karak Cavern was discovered along with the dwarven people residing there; and Bri acted as their sole connection to the surface world until it was more properly mapped in 163 PC.
By 200 PC, Bri had expanded a secondary wall allowing further construction within city limits. Soon after, the security offered by the militarized region allowed for nearby farmland to spring up. This allowed for a massive spike in population to meet the relative abundance of readily available food.
The Mage’s College was built in 203 PC, turning Bri into a hub for mages and magical study.
In 234 PC Bri began constructing levels up and down to accommodate the increasing population. This feature remains unique to Bri even to modern times, and is considered to be a marvel of engineering.
At the turn of its third century, Bri received its first Focci amenities with the construction of several Focci Lifts for transporting goods up and down the mountain and between its various levels.
Between the years 306 and 325 PC, Bri’s now ‘Outer Wall’ was constructed nearly doubling the city’s geographical footprint.
In 321 PC The Elevator was completed, linking Bri with the then Dwarven city of Brokrim.
362 PC marked a systematic rebuilding of many of the city’s buildings; tearing down outdated wooden structures for stone replacements and the addition of much needed infrastructure in the form of wider roads and new courtyards. The ‘Inner Wall’ was re-purposed to house the now called ‘Royal Quarter,’ exclusive to the Velkan family and their guests and staff.
386 PC marks the beginning of The Daemon Wars, signified by the Druidic siege and assault of the city. Though the destruction was crippling, it was isolated to only a few areas within the outer-most layer of the city allowing its repair to last only a year.
In 387 PC, Bri acted as the staging grounds for Puritas forces to wage proper war on the then Daemon infested Karak Cavern. Later that year, in the wake of the Daemon Wars, Nel Velka had The Mage’s College reconstructed and the underground tunnels sealed off.

Being a hub city for trade and civil advancements, Bri is extensive both physically and socially. The city is broken up into eight ‘districts,’ in addition to the ‘Royal Quarter.’ Unlike most cities that are built either within citadels or tucked behind an outlying wall, Bri is built into the side of Mount Fenri and is spread across the mountain’s plateau and the surrounding area. It is also built into levels, which immensely increases the population it can house comfortably even with its considerable surface area. The city is also segregated by three walls, which group the city into three areas known as the ‘Outer Ring,’ the ‘Market,’ and the ‘Royal Quarter.’
The Outer ring is primarily a residential area, but it also houses much of the city’s food processing and military structures. The ring is built exclusively on the flat plains below the mountain, and it is mostly exclusive to ground level. A few areas, especially near the Market, have lower levels dug into the rock, but they are often dirty and neglected. Within this ring are five residential districts, which are segregated by short barrier walls each with three gates along their length from the inner to outer walls.
The Market houses Bri’s considerable economic centre, as well as the new Sky-Port the city is famous for and the new Mage’s College. Filled with shops, industrial buildings, storehouses, and even offices; the market is built into four levels up and down the lower levels of the mountain. The lowest of these levels is restricted to military personnel, and has the only known remaining access points into the tunnels beneath the city as a whole. These entry points were kept open in case the tunnels would be needed to shelter citizens in times of war, and saw use in the 386 invasion of the city. The market is segregated into three districts, each with their own distinct purpose. The ‘Heart,’ also known as the ‘Centre,’ or ‘Courtyard,’ is the primary shopping district located around the city’s primary courtyard. Though not walled in, the district houses exclusively shops and industrial buildings for production. Surrounding it lie the north and south quarters, which contain storehouses, more industrial buildings, as well as the city’s main barracks. The two ‘quarters’ (with nomenclature derived from the city’s older distribution), form a partial circle around the ‘Heart’ and stretch around the Royal Quarter.
Within the city’s innermost wall lies the citadel and its surrounding ‘Royal Quarter.’ This houses several large homes for the city’s noble denizens, as well as several gardens, the Royal Library, and innumerable living accommodations for service staff. 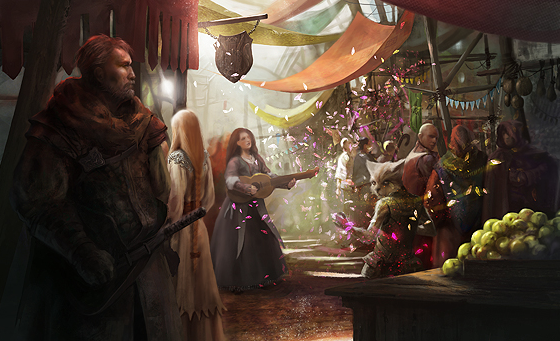 Harbouring nearly 400,000 registered citizens, Bri is the single largest city in Nera for population and density. Though Shienar covers (slightly) more land, Bri’s levelled construction allows for a significantly higher number of people to live within its walls. The denizens are of a diverse racial demographic, with a slight Humans and Kyrosh majority mixed in with strong groups of Dwarves and Elves. Regardless of these majorities, traves of just about every major and minor race can be found somewhere in Bri. Though the Velkan family that rules the city is Human, these are several lesser houses that inhabit the city (some of which take up some of the municipal duties). These families are not entirely human, and are listed as follows: Verendi, Luum, Phobos, Odentei, Drumvo, Vex, Galphi, and Drafei.
Being such a massive city, Bri has evolved its own culture and even a few subcultures unique to various districts. It can take some time for immigrants to fully adjust to the packed city streets, but its difficult to get by without knowing the ins an outs, dos and don’ts of Bri. For the most part, people in the city are busy. Though its easier to stay alive behind thick walls than out in the wilderness, its expensive; and everyone needs to do more to make ends meet. Thankfully, being a trade hub, there’s no shortage of people to sell goods to, and the people of Bri regularly meet the demands of buyers near and far. Having properly industrialized many essential products such as arms, armour, building materials, books, tools, clothing, and much more; Bri thrives on secondary industries that take in raw materials and produce goods with staggering efficiency. Unfortunately due to machinery making many of these work lines semi-automated, jobs can be hard to come by and hard to keep as little skill is required to produce the vast majority of things.
Still, the people of Bri work hard to keep the heart of Nera beating; and give little reason not to trust in their methods. It can be easy to feel lost inside such a vast and complex system, so people often turn to their kin and develop close bonds with small groups of people. Sort of like commoner versions of noble houses, certain circles do their best to look out for one another and accrue as many assets as they can to keep each other stable and well supplied. Unfortunately this kind of ‘clique-ism’ makes it difficult to hunt down criminals, as friends will defend friends without need for proof of innocence. Some criminals take further advantage of this, forming groups of organized ruffians and thieves knowing their stonewalling of authority won’t be seen as out of place.