Regardless of how civilized any world might become, there will always be a need to bear arms from time to time. Violence is the only true authority from which all other authority is derived; so learn the art of war well or at least bring some friends who have. There are some important things to remember about combat in the AoG system: Firstly it won’t always be fair. The world can be cruel and unforgiving, and for characters who get themselves into trouble it can be overwhelming. Never expect a fight to be perfectly balanced, and always be ready to turn-coat when you have to. Secondly, positioning is extremely important. It’s important to protect your friends and threaten your enemies, so make sure you’re in the right place. Finally, AoG offers no reruns. There is no resurrection magic, and GM’s are discouraged from adding any. Death is death, so think twice before you act. Protect your friends, and count on them to protect you; it’s the best chance you have for survival.

Combat works in cyclical rounds, during which players will take turns to perform actions. Each round represents six seconds of time spent in combat, and within each round each combatant will have a chance to perform actions. Each character observes the round separately, and the only definitive ‘beginning’ or ‘end’ of each round is when a character takes their turn. Effects or abilities that last ‘until the end of the round’ last until the beginning of the following turn (of the same character, so it goes past everyone else’s turn and then finishes as the character who activated the effect or ability begins their next turn). Some might last ‘for three rounds,’ in which case count each time the character in question begins a turn, and end the effect when you get to the third.

Preparing for combat is a relatively simple process. Your GM will give you a map of the area on a hex-based grid. Each player will then place a marker or model to represent their character(s) on the map, and the GM will place markers or models to represent objects, other characters (friends and foes), or anything else that might have an effect on the battle. Each player should then gather up their character sheet and make sure they look over their available actions and stats before combat begins; battles and lives have been lost by players forgetting what their characters are capable of. Finally, the GM will have players provide initiatives, and once an initiative order is compiled (see below) combat can begin.

Before engaging in combat, players need to determine the order in which every acts. This is called the initiative order, and represents a culmination of each character’s speed, agility, awareness, and skills to react to danger. To decide the initiative order, each character will roll a d10 before combat begins and add any applicable modifiers they might have to get their ‘initiative score’ for that combat. No character may get a higher bonus to their initiative than their dexterity, because no matter how skilled you are you’re limited by how fast you can move. It’s a good idea for each player to record their initiative on their character sheet or a notepad temporarily, as it could change over the course of battle. Once every combatant has an initiative score, the GM will note them all down into the initiative order, which is the order in which characters will take their turns.

Sometimes one or more combatants sneak up or get the drop on other characters. To represent this characters being surprised get a perception check to notice their enemies before combat, and anyone who fails is considered flat-footed until they begin their first turn. As well, characters who fail this perception check do not get the default two action points going into combat.

During combat, characters will use action points to perform actions. Each player inherently has a pool of 6 points, representing the amount of time and effort they have to spend during a six second ‘round.’ When combat begins each character starts with a default of two action points, and fully fills and refills their pool at the beginning of each of their turns. Some talents may increase action pools, but these bonuses are minimal because of how heavily they impact combat. Actions will cost points, representing how much effort and time they take. Some actions may cost 0 points, and some may have other costs (stamina, ammunition, etc.) or even prerequisites of gear.

The bread and butter of any combat, actions are just that: things characters do. Each character may by default use any of the ‘basic’ actions, and will gain access to more complex and powerful manoeuvres as they gain talents. Most actions can only be performed during a character’s turn, but some (which will be declared in their descriptions) can be used on other character’s turns in response to things going on around the battlefield. Some actions may also increase or decrease a character’s initiative. Regardless of how the value changes, finish any turn currently underway and then continue the order as normal. Actions that directly change initiative order may also occur (such as ‘Hold’), in which case shift the character’s place on the initiative order and then change their initiative the lowest possible amount to suit their new spot (i.e: if a character has a 12 initiative, and needs to move one spec down on the initiative order below a character with an initiative 7, their new initiative becomes 6).

There are two types of ‘hit points’ AoG uses to represent a character’s resilience: fortitude and wounds. Fortitude represents and individual’s physical resilience, their pain tolerance, how many hits they can take before they just can’t fight anymore. When a character’s fortitude is reduced to 0 (it cannot be reduced below 0) as the result of damage, that character immediately falls unconscious. Wounds work a bit differently, and represent life-threatening injuries a character has sustained during battle. Arterial cuts, punctured organs, cracked skulls, and other major injuries might be considered wounds. Most commonly wounds are received by critical hits (dealing more damage than a character has armour), but other abilities may cause wounds as well. If a character ever receives as many wounds as they have CON they succumb to their wounds, fall unconscious, and begin to die.
When a character is ‘dying,’ have a number of rounds equal to their CON before they’re lost completely. A tricky heal check from another character can ‘stabilize’ them, to stop them from dying; or any kind of healing magic may also do the trick (though some kinds of magic may also prevent healing).

Both in and out of combat, there are sources of magical and non-magical healing characters can use to keep themselves topped up. Magical healing is simple, spells will declare any fortitude damage, wounds, or status effects they remove from a target character and they do just that (unless something else prevents them). Mundane healing on the other hand is much trickier, and takes a lot of time to accomplish. It’s done so using ‘heal’ skill checks, and is more effective the higher the roll. In combat healing ‘actions’ must be taken; they’re limited, and are specified in the ‘action’ and ‘talent’ lists, Out of combat, any character may make a heal check to remove fortitude damage equal to their heal check roll from another character for every hour of care provided. Special talents and items may increase a character’s effectiveness as a healer, even up to being capable of surgery or other means to remove wounds.

An important resource for active combatants, stamina represents a character’s ability to continue strenuous physical activity for prolonged periods of time. Most actions require some stamina to perform, and more difficult and powerful actions will require more. Pacing yourself, so you don’t burn out too early, is an import concern if you want to take down hardy opponents. It also allows more nimble characters to outlast their stockier counterparts, so keep your stamina in mind whether you’re using it to your advantage or it’s being used against you. Unlike fortitude and wounds, stamina can be easily recovered mid-combat. Any time a character neither expends nor loses any stamina during a round (from the beginning of one turn to the beginning of the next), they regenerate three points of stamina. Talents may increase this regeneration, or provide other sources of energy. If a character ever runs out of stamina, they become fatigued.

An important part of AoG’s combat system is where each character positions themselves on the field of battle. In addition to the hex they occupy, characters have a ‘facing’ which is very important to some abilities, as well as to a character’s awareness of the events around them. Make sure you designate and keep track of which way each character is facing in combat. As well, characters receive a penalty to their dodge the farther an attacker is from their front edge. Consult the diagram on the left for dodge penalties.
Characters also have a zone of control called a ‘threatened area’ they exhibit onto hexes around them. A character threatens hexes along their front arc, that reaches as far as the melee weapon they are holding. For example a spear that has a range of 2 meters (two hexes), the wielder threatens a cone in front of them two hexes deep; if a character has empty hands (which when used for attacks have a range of 5m or one hex) they threaten a cone in front of them one hex deep. Certain abilities or actions can only be used on opponents that you threaten, so keep that in mind when you position yourself in a fight. See the diagram at the bottom right of the page for examples on threatened areas. 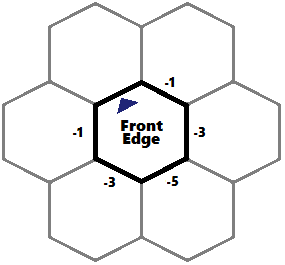 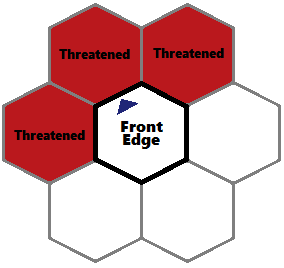 Characters and even objects can obtain a number of afflictions from incoming attacks, spells, even the environment around them. These can provide bonuses or penalties (or both) to various actions. Some of these ‘conditions’ last a specific number of rounds, or turns, while other can last for days or simply be continuous as long as their source remains present. Some conditions may ‘stack,’ which means they get more intense the more exposed to them a creature becomes. In game these will be represented by a stack of cards that you’ll accumulate as you take increased effects.

We've already been saving your edits, so if you upgrade now you will have instant access to your previous versions. Plus, you get a 15-day free trial, so there's nothing to lose.