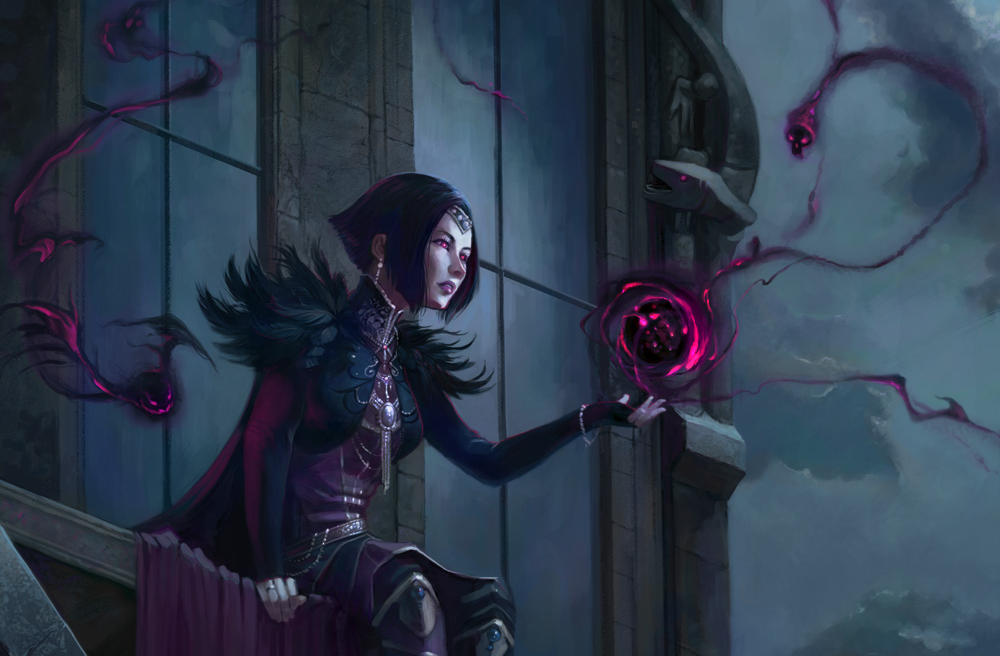 The Daemon Mei’Vin is known by many names, some of which include: ‘Taker of Light,’ ‘Insatiable Shade,’ and even ‘Death Incarnate.’ ‘It’ was created by Tychus prior to The Daemon Wars, and she carried out his bidding setting up the events known all too well in history. Perhaps most famous for her assassination of Rose Velka, her reign of terror went unopposed until the conclusion of the wars themselves. Though all Daemons are technically genderless, Mei’Vin was only known to ever possess female bodies, giving her the designation of ‘she.’

Due to her central involvement with Tychus’ plans, Mei’Vins known powers and capabilities have been comprehensively catalogued. The culmination of known information between agents of the Velkan Crown and Tychus’ notes, a reasonably full understanding of the Daemon‘s prowess is recorded and kept in the Puritas Tower.
She is rumoured to be the first successful attempt to create a hybrid Daemon / Aura infusion, and is capable of possessing and controlling almost any host with near total effectiveness. While some hybrids have been defeated by their hosts, there is no record of Mei’Vin being ousted from a host internally. She is known to be a potent caster, amplifying her Daemon half’s natural connection to mortuus extensively. It is rumoured her connection was so significant she could kill lesser beings with mere touch, which allowed her to gain power at a considerable rate. Unlike most Daemons, Mei’Vin was known to retain her own casting abilities while inside a new host, instead of infecting and controlling them she would simply devour them and use her own power. In martial combat Mei’Vin’s capabilities were more in tune with her host, which took a drastic turn when she possessed a Dreadknight and used its body to assassinate and consume the Queen. Once in this body, she kept if for the remainder of the conflict and used it to kill several individuals of note.
Mei’Vin was also capable of reflecting physical attacks using an interesting mix of saxum magic that has never been fully identified. However her most potent combat ability was being able to phase the physical form she was possessing into an aetheric form, much like an Elemental or Daemon itself. In this form she could move through physical objects emanating mortuus energy until she reformed into her host once again. This ability was unique to Mei’Vin (as far current data suggests), and is attributed to her considerable body count.
Nearly as powerful as herself, Mei’Vin carried an artifact she referred to as ‘sweetness.’ A scythe, rumoured to belong to the founder of the Ordo Justicarus and tainted by Tychus’ experiments, it was a weapon of unknown power and origin. It could manifest in its wielder’s hands at a mere motion of the hand, and could attack opponents without the need to be held or directed. It resonated with mortuus magic, and would often suck the life out of anyone who touched it. Only Daemons possessed the necessary Aura to hold it without being hurt by its power. The scythe was later destroyed by Nel Velka, how exactly is unknown.

Attributed to a slew of deaths across Nera, many believe Mei’Vin was the single most effective assassin in history. The death that revealed Mei’Vin as a threat was her assassination of Rose Velka, which was carried out with little to no subtlety. After tricking her way into the palace at Bri, she broke free from her restraints before possessing a Dreadknight and using her physical appearance to travel unhindered though the castle. Finding the queen in her study along with her youngest daughter Nel, Mei’Vin dispatched the guards with ease before turning on the royal family. She wounded Nel before turning to Rose and stabbing her through the stomach. Nel’s recanting describes Mei’Vin eating her mother alive right before the princess, too injured to do anything to stop it.
From there she went to burn down the city of Barga, rumoured to be searching for a member of the court there, and continued eastward to Fai. She would then go to overtly murdering several members of the Noldor court and eventually found her way to Droan to continue her work. After killing Orassa Lillaen, the middle sister of the Lillaen Family, she moved on and attempted to murder Cad. After failing to kill the prodigal Focci engineer Mei’Vin dropped off the map until she resurfaced in the invasion of Karak after the wars had actually begun.
During the subsequent campaign she is known to have killed several important military figures and even overpowering Puritas Paladins at several points during the invasion. While making an attempt on the life of Nel Velka, her weapon of choice was destroyed forcing her back into the shadows for several weeks before she tried to stop Malak Sigar from making it to Tychus. Without her weapon Malak managed to dispatch Mei’Vin, but only after being wounded substantially himself.