A Period of strife remembered all to well by the inhabitants of Nera, ‘The Daemon Wars’ refers to the period from 386 to 387 PC during which Tychus led his campaign to wipe out all life in Nera. While the wars were devastating, Tychus’ legions did eventually fail and the wounds of his blight are healing. Immeasurable respect is placed on the heroes of that dreadful time, and the few who have survived command reasonable authority in most places they visit.
Though the exact details of this difficult time are far from concrete, the fact that Nera even exists to this day shines upon the will of the people to survive and endure, and it is taken as testament to the strength that can be mustered by working together.

The seeds for the Daemon invasion of Nera were planted many years prior to the actual event itself by Tychus and his servants; though no one knows exactly why he set about on the path he did. Some say he believed the Divines sought to cleanse Nera in The Cataclysm and simply failed, that he intended to finish their work. Others claim he was simply driven mad from gazing into The Fissure. Whatever his cause, Tychus set out and executed one of the most effective military campaigns in Neran history.

It’s believed Tychus came to see Daemons as the perfect potential weapon in pursuit of his goals long before he joined the Ordo Puritas. Likely he joined to learn from Puritas experience on the subject, and used their library to hone his skills in manipulating them. His insatiable drive to understand these horrific creatures allowed him to climb the ranks quickly, doing experiments in secret that the order dare not and learning to mould them into beasts and soldiers. He eventually positioned himself as a lesser member of the Puritas high council, acting as their Master of the Armoury. From this position he held back Daemon-fighting weaponry several decades, and used their supply of Focci for his own experiments and means.

During his time as a Master of the Puritas Tychus at some point began creating his ideal weapons for destruction. Daemons, twisted into monstrous hybrids of man and abomination, became his servants and soldiers alike. Bound by magical means, and dumbed down to only the intelligence necessary for their tasks, Tychus found in them a force like no other. One of his earlier and most infamous creations was the Daemon Mei’Vin, an assassin he beset upon key individuals to weaken Nera’s ability to respond to his impending destruction.

While she went about removing key elements of Nera’s defence, Tychus returned to his studies and finalised his plans for his Daemon army and invasion. Specifically designed hybrids to act as soldiers, saboteurs, breeders, and even siege weapons all fell into place as key elements of his plans to destroy all life in Nera. Building his army however, would take time, time and livestock to breed the Daemons he would need as his bulk force. He turned to The Druidic Tribes, a people long ignored by the civilised places of the world, and sought to infect them with the seeds of Daemons. Nomadic but communal people, the infection spread from tribe to tribe over the course of a year. By the time the severity of their plight was realised, nearly a third of all Druidic nomads had been infected. Rather than finding proper blame for their situation, the Druidic council directed their anger towards the major cities and the Nobles that rule them. There, where Daemon infections were most prevalent, they sought justice for what was happening to them. After amassing their infected population on the northern border of The Hæven, the Druidic council oversaw the invasion of the city of Bri. This battle would mark the official start of The Daemon Wars, and the only time Bri’s walls have been breached in it’s history.

Midway through their attack, agents of the Velkan Crown managed to muster a peace agreement with the Druidic council, but Tychus (whose activities were not fully understood at the time) managed to use their peace to have his own people systematically cleanse the Druidic population. While the world thought he was saving their people from certain death, he was instead harvesting the crop of monsters he had seeded the previous year. Simultaneously, during the confusion of the battle, Tychus had much of student body from The Mage’s College abducted to be used in the creation of his more advanced hybrids.

Following the attack on the city, new information came to light that heavily implicated Tychus in not only the attack on the city, but his deception of the Ordo Puritas and his manipulation of their council. When one of his chief apprentices was pressured for more information, he promptly attempted to take the life of The Queen as well as several of her agents including Ark Nora, Val, and Chief Laysia. It was at this point hope for the first time appeared in view.

With his plans exposed, Tychus took what resources and backing he had and fled the surface for a hidden bastion in The Karak Cavern. From then on, it became a race to prepare for what was to come.
Nel Velka sent out two parties, one to pursue Tychus in his retreat, and the other to rally the Noble Houses of Nera together for the impending threat. 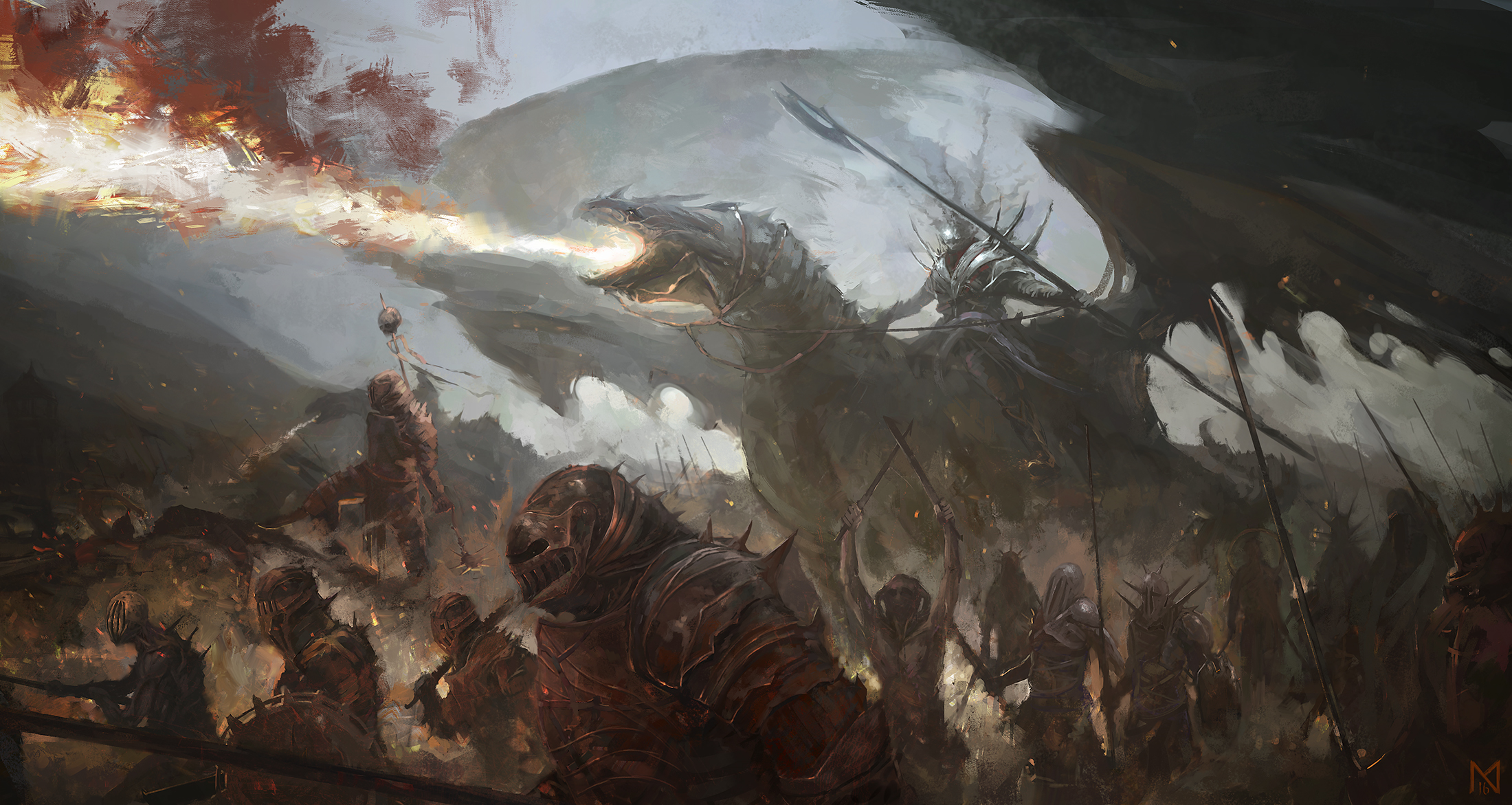 During the invasion itself, The Hæven and Karak were hit the hardest. From his bastion on the eastern fringe of the Karak Cavern, Tychus unleashed his legions first upon The Underdark. While the blunt of his forces pushed West, they took the city of Kadro in a day, and within a week had conquered Trockad to the south. Brokrim’s defences held for a week, before falling shortly thereafter. It was then that Tychus split his efforts, sending more than half of his forces south towards Dukal and the Mak Cavern. Using The Elevator to get to the surface, Tychus’ legions of Daemons moved north towards Bri and were met with The Velkan Legion on open ground. Instead of unprepared victims, he was met with thick shield walls backed by Puritas and armed with all manner of weapons dedicated to their specific foe. Unable to breach the lines, and lacking the bodies to replenish with, he retreated back to the cavern to plan his next move.

The Queen gave pause, and ushered her armies to remain vigilant but stationary. She secured The Hæven’s borders and set watches on the known entrances to the cavern below. Over the following months several attempts on both sides were made to establish footholds in enemy territory. Daemons would breach the surface here and there, while legionnaires would often break through to the cavern only to be massacred and left to Tychus’ experiments. It wasn’t until news of victory in the east came to the west that Nel recommitted to taking the cavern, and in one massive swell pushed their way to the end of the invasion.

Led by a swath of heroes, including Nel, Ryke, Mekei, Malak, Val, Ark, and Laysia, The Velkan Legion mustered alongside forces from Verkai and pushed into Brokrim from The Elevator. Wave after wave descended into the depths of the cavern, stepping over the bodies of their kin to push back the horde. Mei’Vin, along with several new species of Hybrids, target the allied leadership, injuring many and taking the life of Mekei Velka. Retaking the city took two straight days of unending battle, testing both the skill and stamina of the combined forces. Knowing the location of Tychus’ fortress, The Queen left a contingent of troops to defend the dead city, and pushed southeast to Dukai. There, they met with Kyrosh, Elven, and Dwarven forces from many houses, and promptly began their push north to Tychus.

Slowed down by skirmishes and guerrilla tactics, specific and strategic assassination attempts by Mei’Vin put several of the more notable figures to the test. Direct attacks on Ark Nora, as well as several noted commanders and mages leave the Velkan Family’s guard weakened, but Nel insisted they push on regardless. Finally after weeks of on and off fighting, their force arrived at the walls of Tychus’ lair. A massive keep carved into the side of the cavern, the Daemon horde used the tight corridors and hidden passages to make the legion pay dearly for every inch of ground they took. Magical and mundane traps had been set all throughout the fortress, and added to the death toll by a margin still not properly understood. Malak Sigaar, fed up with the death of his children and people, called out to the echoing halls for Tychus to meet him in single combat. Much to the paladin’s surprise, the challenge was accepted as quickly as it was ended. Malak’s death pulled many to avenge him, but it was Nel Velka herself who put Tychus down once and for all.

While much of the glory for the Daemon Wars went to House Velka and their victories in the west, Elven and Kyrosh victories in the east were imperative to the successful purging of the Daemon threat. While Tychus’ eastern contingent ignored much of the Mak Cavern, they set much of Chryss on fire in an attempt to starve the surface forces of their much needed metal and Focci. Prepared for their invasion, the Sindor houses had already evacuated their major cities and began to spread out for the sake of survival. They supplied materials to the surface for several months after the occupation of their cities, and ensured that the Erkai and Lillaen forces arriving in Fai would have the supplies to mount a serious offence.

Once unified and armed, combined Kyrosh, Elven, and Dawrven forces mounted such an effective offence that their lack of Puritas support went nearly unnoticed. Rather than seal the Daemons brought down by their soldiers, mages were simply instructed to apply heavy vaccous spells to drain them out of existence. While it led to a bloody and hard-fought victory, it was as swift as it was complete. Unable to mount effective defences, city after city returned to Sindor control as ruthlessly effective strike teams moved independently through Chryss. After securing the cavern, the combined forces of the eastern houses moved straight through the Mak Cavern to Dukai to reinforce Velkan Forces and push to the end of the invasion. 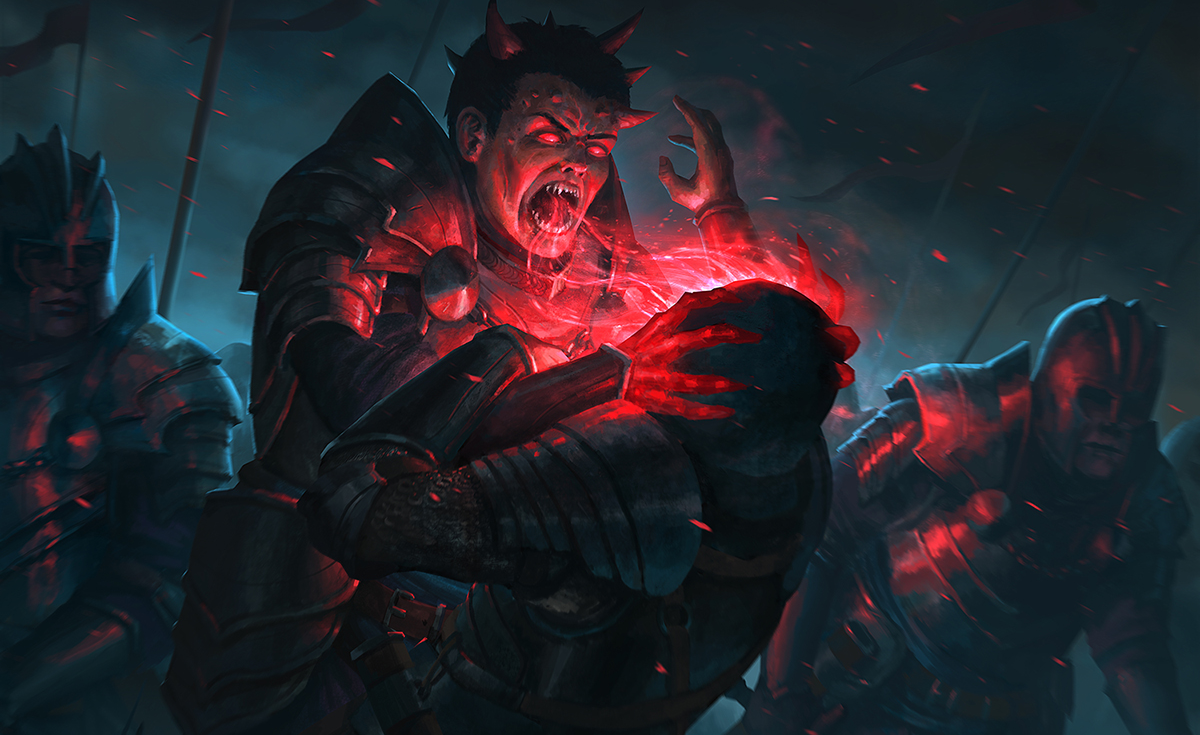 Given the unchecked destruction to much of the Underdark, many Noble houses of the surface sent resources and funding to aid their subterranean partners in returning to power. Accepting the burden as a communal one, many families set aside previous disagreements to revitalise the economy and all it’s arms to ensure Nera as a whole could recover from Tychus’ reign. Inspired by these examples of good faith, the Noble Houses of Suul-Nera brought about an unprecedented time of peace that has lasted to this day ( with only one notable exception ).

The only real hiccup to the communal rebuilding process, came on behalf of The Velkan Queen, who refused to return control of the city of Brokrim to the Dovol House. This marked her most questionable act as queen, but has led to a brutal economic advantage taken by her house in the time since.